The Arctic Ocean is transitioning from a quiescent ice-covered basin to a seasonally ice-free sea. This means that open water processes, notably surface waves, are becoming increasingly important for air-sea exchanges and upper-ocean dynamics. The major focus of this experiment is on the modification of ice formation by wave motions and the associated modification of upper-ocean turbulence and air-sea fluxes. The long-term goal for WAAXT is to produce the data and parameterizations needed to understand climate-scale feedbacks associated with the emerging wave climate in the Arctic basin. Specific goals include:

-Measure near-surface turbulence, both under ice in wavy conditions, as well as in open water in ice-formation conditions. Particular focus on the spatial structure in relation to Langmuir circulations, ice variability, and frazil.

-Measure sea ice surface roughness, floe size and draft as well as aerodynamic roughness and drag coefficient in order to determine wind stress and momentum transfer from the atmosphere to the sea ice in the MIZ.

-Measure the propagation and dissipation of surface gravity waves in an ice-covered coastal environment.

-Measure the effective conductivity of the top centimeters of the ocean’s surface during ice formation.

-Measure the response of ice, and particularly pancake ice during ice formation, to wave radiation stress. 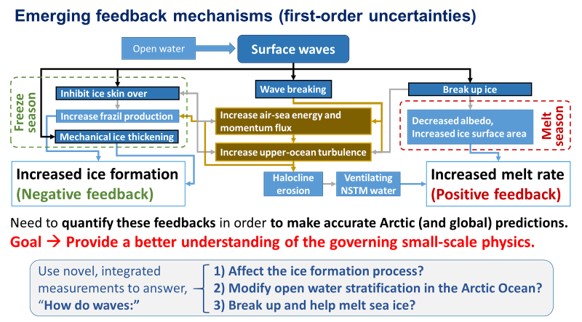